HomeNewsInnovationROAD TO RECOVERY, ONE YEAR ON

ROAD TO RECOVERY, ONE YEAR ON 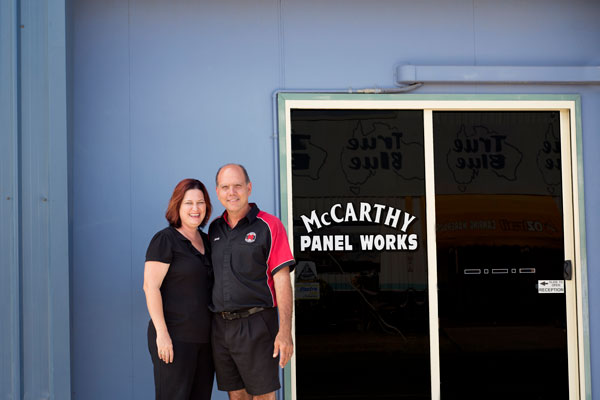 Originally published in the June 2020 edition of Motor Trader, we spoke with the owners of four MTA Queensland member businesses from across the State. One year on, we talk to those business owners again to see how they have fared and how they feel about the future today.

For Andrea McCarthy – who with husband Craig owns McCarthy Panel Works in North Mackay, and is Chair of MTA Queensland’s National Auto Collision Alliance (NACA) – the first few weeks of the Covid pandemic were deeply worrying.

“Those first couple of weeks were tough because we just didn’t know what was going to happen,” Andrea told Motor Trader last year. “Were we going to be able to trade? The workshop has to be open and people have to be here for the business to function. We had to come in and do our jobs every day and face the potential dangers. I called it the ‘front line’ and, at the time, that is exactly what it felt like.

“We basically said to everyone that it is ‘business as usual until it’s not’. In our case, which I know is not the same as everyone, we did have work to do, so I was saying ‘don’t panic, your job is still here and will be for the foreseeable future’.

The reality was that no one really knew what was going to happen . . . ”

It is true that most areas of Queensland have been spared any major COVID-related outbreaks and, since those worrying days of March-May of 2020, things have returned to something near normal – a recovery that, Andrea said, may be due to Australians deciding to holiday in north Queensland or catching up with work that needed to be done on their vehicles but had been put off until now.

“I’m not sure there is ever a normal in this industry and, honestly, we are busier than we have ever been,” she said. “There is some chatter that this is because of the reduced claims from last year, although for us it about more vehicles on the road – we have had a mix of interstate travelers preferring to drive.”

However, though business is good, work plentiful, and COVID barely registering in the Mackay Regional Council area (as of May 25 2021, just 22 Covid cases had been recorded according to the Queensland Government), the virus has still left its mark on the town and on its automotive businesses. Most notable is the issue of parts.

12 months ago, Andrea mentioned that sourcing parts was already looming as a problem. One year on, the parts problem is a real complication.

“We are actually in the midst of the effects of this now, with parts fast becoming the biggest concern,” said Andrea. “In regional areas, there is a very high percentage of clients that have bullbars and accessories that require replacement. In most cases, our suppliers cannot get the products for 2-3 months.

“We also have issues with a lot of electric components like modules, wiring looms, and sensors. And, most unexpectedly, we are experiencing a shortage of white paint, which seems crazy but the company we use manufactures it here in Australia and they simply cannot get the raw materials to produce it. That is directly linked to COVID.”
This issue is a common one across the sector. While members of the NACA have been affected differently depending on their location and the fluctuations in the numbers of cars on the road, parts delays is a problem reported by all.

And that leads directly to the second effect of COVID that Andrea has noted – an effect that has been within the community itself.

“Apart from the initial shock and the tremendous uncertainty at the start, it seems most of the local community adapted, made changes and made the most of what they could do,” said Andrea.

“However, we have seen a direct shift in attitude as well. With a lot of the community not exposed to the effects of COVID they are less tolerant of it being the reason for delays, which is interesting,” she added. “There seems to be an attitude of, ‘Well, that was last year’, and that is providing new challenges. Hostile client behaviour seems to be increasing as a result of the unexpected delays, and production schedules are constantly disrupted.

“The reality is we do have to learn to live with it. As a community we need to be more tolerant. If there is one thing I could suggest large organisations or government bodies could do, it would be some kind of education campaign of the effect of production facilities worldwide being closed for so long and the flow-on effect to manufacturing.

“The reality is we have all seen delays in other industries, but I guess the difference between waiting for a couch verses a car repair is the impact is greater and more disruptive. The reasons for the delays are the same, they are just tolerated differently.”

As for the support offered to businesses by governments, Andrea said that while they did not need to access everything that was available, those they did were excellent initiatives. Foremost amongst these is the wage subsidy for apprentices and trainees – through which eligible employers can apply for a wage subsidy
of 50 per cent of the apprentice’s or trainee’s wage.

“We have been fortunate to maintain continued operations the whole time so did not access the JobKeeper funds, but we did receive relief from the PAYG rebate, and the apprentice rebate,” said Andrea.

“I believe the latter was the best initiative the government provided as it allowed for not only existing apprentices but also accommodated for the hire of new apprentices. And there is another benefit – the panel industry is still experiencing a shortage of qualified people, so this incentive aided in retention and an increase of numbers into training. Throughout the last year we have had four apprentices, one completed and a new one signed up.

“The funding we received was easy to access. The PAYG rebate was handled through our accountant and the apprentice rebate, after the initial set-up, was quite simple. And we have been able to utilise the funding to expand our workshop and capacity and are in the process of introducing new opportunities. That is exciting.”